Some Jobs Are Just so Complicated

HomeBlogBlogSome Jobs Are Just so Complicated

Some Jobs are just so complicated; that the pricing is at best a good guess.  These are the projects we need good nerves to tackle.  If you try and price for the worst, your customer won’t be one for long.  If they sympathize with the site problems, that’s a plus, but don’t expect that to last long.  Be real, and deadly, honest.

When Target left town after a fast cup of coffee, they left a pile of trouble behind them.  We were asked to remove 4 escalators from one of their former stores, and replace two in another spot, same site.

Encore prides itself on being a specialized lifting company; and we are the real deal; doing lifts thru windows, into low doors, up into mezzanines, jack and roll, down stairs, lots of interior work.

But the most complex, confounding lifts are the escalators.  Long heavy beasts, with minimal head room and precise lift plans.  When Katz was building his hockey rink, we had 24 of them sitting in our yard.

They are a single piece unit, usually shipped in two pieces and we splice them together in our yard; but the install is invariably one long awkward, heavy piece.  Approximately 48 to 50 ft long and 17,000 lbs.  The setup is simple, lift lugs both ends, the upper end just a steel plate that rest on an upper beam.  The lower landing is dropped into a concrete pocket, exactly 4 ft deep.  So it has to be lifted 4 ft out of the hole.  Sounds so simple.  We can cope with the bottom lift, and usually have a separate and smaller unit lifting the low end.  Just lift it up 4 ft out of the hole.

That is the problem.  The concrete pocket is built to such precise measurements; to ensure correct height and angle of the stairway, the entire structure must be lifted 4 feet vertical. KEEPING THAT EXACT ANGLE.  If that angle is compromised, before the pumps, conveyors and stair treads clear the floor, the escalator jams in the hole.  Then you lower and try again, to coordinate the 2 cranes, the 2 operators, the riggers and the signalmen; to lift at the perfect speed.

We can handle this operations problem, it’s a matter of technique, but 50 ft away there ‘is’ a larger problem, above the top landing.  If you picture yourself heading up the escalator, above the top landing, its high, clear; lots of room.  Our cranes, massive folding models, have the capacity to lift this behemoth from the required 60 ft, that’s not the problem. 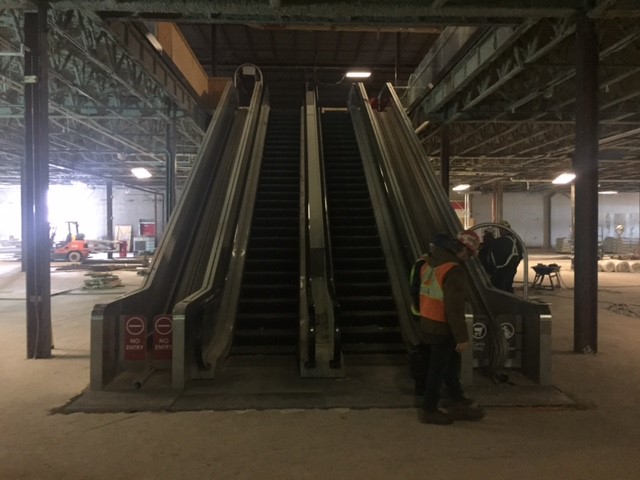 We’re sitting at the bottom of the stairs and reaching up.  The ceilings are rarely over 15 ft, there are usually columns scattered about the escalators, restricting the placement of our crane.  We invariably hit the roof beams with our cranes.

Our new cranes, and don’t even think of using a long straight boom, our large articulators, when they stretch out, the last section, or the jib will break the horizontal plane.  (we can go straight under a beam, or a wire, and then articulate up 12 to 15 degrees, a god sent gift in our business)

It’s still not enough angle to reach the top lift lugs.  The cranes are so big, the escalators so high and heavy, that we may be able to reach the top, but the 4 foot rule puts us into the beams above our crane.

We ‘have’ to lift at a mid-point on the escalator.  And of course once we have it lifted, make sure we have a spot to set this dinosaur.

It’s a Tylenol moment to plan these jobs, but we went down to check the site.  Pat normally checks the sites and he made the first visit.  It was a major.  Both senior partners, and our journeymen sons, Jeff and Pat went down.

At first we thought we could do the job, barely.  We took our measurements but the install was questionable; that side was still a hole and a pile of debris.  It was tight.  I sent my 30 ton specialist down, the distance was closer, the crane could lift it;  just could he get in there……..  He was sure he could hit it.  We had more questions.  Just to be sure we sent him back again………  And Yes we could definitely do it.    Good news.

Our large crane operator had some misgivings about our calculations for the removal.  Our preferred method had never worked before.  We sent him down to recheck.  ……….When he called in, there was no way we could reach the top.  We would hit the beam above the crane.  We took our measurements and graphed the whole lift out again.  It was close, too close to mess around on a good customer without knowing we could do the job.

We HAD to do a dry run and sent both cranes down to site, see it for real.  ……..  And we hit the beam.  We could not believe it……….But our crane operator is a clever fellow and Gary thought if we sat on a corner, reached kiddy corner across the other three escalators to the far side, check the photo, we would have more headroom.  My thought was, “No chance.”, …But, it is a game of inches, and as we sat on the corner, we inched closer to the upper beam, and that is a good thing.  The closer we got the higher angle we could build; but there was a column there to contend with.  We reached under the beam, cross the escalators to the far side, and this time reached higher on the escalator.  A lot higher. It looked good.  Gary said it was an easier pick, but still a body pick and not a top lift where the lift lugs are.  Never a problem before.  We thought we were set.

But our customer was nervous about even a high mid-point lift.  He nixed the whole idea.

I sat on that for a couple of days knowing the TON of work involved in building gantries, using chain hoists and manhandling the scaffolding, the beams, the blocks, pushing the escalators around and tearing them apart.  A 2 week job in itself.

I phoned the foreman to express my sympathy and apologize for wasting his time.  He stopped me.  Said they were rethinking the mid-point lift.

Two days later we were offered the job.  But they did not want to remove the glass from the side of the escalators.  That’s a first, AND we had to install exhaust ventilation systems on our trucks.  Oh Boy.  Dual stacks with dunce caps and hoses, leading to a fan and suction system and 100 plus feet of hose, and possibly another fan; for 2 trucks.  We had one system, had to acquire the gear for the other.  We go tomorrow, the Monday; today Jeff and the riggers are loading the jack and roll gear, and the exhaust pieces are being fitted and tested.  Don’t think about charging for this, try and add it in the rate and remind the customer that it was their request.

Wish us luck.  Hope we don’t break any glass.