Encore Trucking pulled together to restore power during the Waterton wildfire

If you’ve never visited, the town of Waterton is a must-see for Alberta – a picturesque village on an ancient riverflat, nestled beside a mountain lake and ringed by the forested slopes of the Rocky Mountains.

In the summer of 2017, a massive wildfire came over the mountain range and, thanks to high winds, raced down the slopes to the edge of the townsite, where the firefighters and water bombers battled desperately to save the town’s inner core. All the surrounding vegetation was lost, including trees, shrubs and grass. But to make matters worse, the buildings and infrastructure were lost, too. In fact, the power grid was torched.

As more firefighters poured into the town to try to get the blaze under control, Fortis sent crews from all over southern Alberta to repair the grid and keep the emergency power flowing.

To help restore the power, ARHCA member company Encore Trucking and Transport Ltd. – the main transport provider for FortisAlberta – was asked to deliver gear to the townsite. They immediately loaded five tractor-trailers to the brim, full of supplies from Fortis’ main yard in Acheson. And with enough emergency gear to restart the town’s power, including transformers, poles, regulators, wire, cross arms, switches, cable and more cable, the team drove hard all night toward the beleaguered town that needed their help. 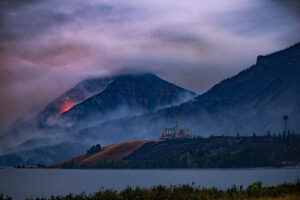 But once they got to the park gates, Encore saw that they had burned to the ground and were still smoking, which meant the entire area was closed. With no park gates in sight, Mounties had been posted to secure the area, but they refused to let the Encore crew pass. “We were warned to prepare for this,” said Don Lucas,
director at Encore Trucking and Transport. “I had instructed our crews to carry Wayne MacDonald’s card, head of logistics for FortisAlberta. I handed the Mounties the card and told them to phone the head of electrical and explain why Waterton will not be getting its power turned back on.”

Not wanting to stand in the way of getting the power back on, the Mounties let the Encore team through. The trucks made their way into the park, driving slowly and carefully into the smoke-filled valley, with ribbons of glowing fire ringing the mountain ranges around the town.

“Barely able to see through all the smoke, we found our crews and offloaded everything we had – stacking transformers onto temporary bases, spotting poles and cable strategically around the town,” said Lucas.

After hours of persevering through smoke and heat, the Encore team managed to string and replace 13.5 kilometers of poles. As a result, the emergency generators roared to life and the first flickers of light came back. Most importantly, this also meant the firefighters were back on the grid.

“The FortisAlberta area coordinator thanked me and our crews personally for saving his team’s bacon during the reconstruction,” said Lucas.

A week later, Lucas and his team went back to survey the damage and take care of any follow-up work that may have been needed. As he recalls, even though his people had been on the ground repairing the damage first-hand, once he returned with fresh eyes, Lucas could barely believe the devastation the fire caused.

“When we met with the Fortis crew after the fire, they offered us their heartfelt thanks for a job well done. They acted like we were the heroes. But at the end of the day, it’s what we’re here for. And I couldn’t be prouder of my team for doing their part.”