Work Scope: Remove 40,000 lb. crates from inside a jammed warehouse.  Load onto trailers, haul down line to 23 different sites, Edmonton to Burnaby.

The crates were massive, all plywood, big blocking underneath. There were so many jammed together that all we could see was one end of the plywood boxes.  These were the big vertical pumps for the new pipeline, secretly stashed in an Edmonton warehouse for two years.  With the lack of space, this was a jack and roll job.  We needed to lift the crates, get them on skates, and somehow drag them out the door.   We had a good jack and roll crew, top notch gear; we could handle that part.  But this was a dock level site; we had to roll down a long ramp to get to ground.  Yowsa!

A forklift, a big one, would be perfect for lifting the crate end we could get at, and  once we got it on skates, dragging the big box out the door and down the ramp.  We went to work on that and found a good one, 65,000 lb. capacity;  arranged delivery; which included verifying the mast was low enough, to transport and then get inside our warehouse.

And we had a thought, if the forklift was that strong, we might be able to use it to load the crate too.  NO crane required, that would be good, all our heavy cranes were pretty busy.

The next day we sent our jack and roll crew, with a pile of blocking to site.  Both myself and  Gary, our field foreman were there.  We wanted this to go well.  The Forklift arrived right on schedule and we walked the massive beast inside.  She was huge, but surprisingly nimble and easy to run.  Some of the smaller crates were really in the way.  The forklift, we renamed, Big Julie; lifted and moved them about like they were Styrofoam cups.  We took them right outside just to clear some room. 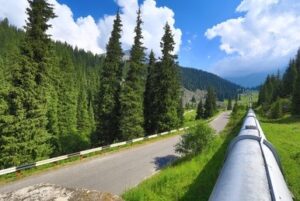 We had to move a couple of the large crates to get to ours.  Big Julie lifted one end and we stuck blocking under the center cross member to create a cantilever.  When we lowered the crate onto our blocking the far end lifted off the floor.  That let us place our skates under a rear cross member.  We lifted again with the big forks and removed our center blocking.  With the forklift controlling the move, we rolled the big crate, thru the warehouse, stashing them along the sides.  Then we tackled our chosen pumps; got them on the skates and slowly slid them thru the warehouse and down the ramp, right into the parking lot, small stones crushing to puffs of dust under the pressure of the rear skates.  It was heavy.  But we were at ground level.

The crates were plainly marked , on all sides, showing the center of gravity.  That helped us get the forks directly under a balance point, and the whole crate rose like a floating giant.  We moved the trailer into position and loaded the massive crate with very little drama.  But now we knew we had a working system.  And that was a warm thought.  We loaded the other 3 crates, and learned a little as we worked.

The ramp and the rolling skate parts were a bit tedious, but we had cleared a bit of space thru the center of the warehouse.  Gary had another thought.

The door was high enough, the next batch of crates, we backed our highboy right up the ramp, inside the building.  Big Julie had the crate in the air already and we backed right underneath and set it straight on the trailer.

That’s how we are loading all of the pumps now.  Sulzer was so pleased we are now loading, And hauling all their loads.

This project is still ongoing, Edmonton to Burnaby BC.  We have been into the Kamloops area about a dozen times.  The big forklift is now ours permanently and we have a medium, 33,000 lb. unit for the smaller crates.