Smaller jobs that turn into mini-projects just because of their complexity.

We were asked to install several tanks inside an existing building. They were fairly small 15×8 ft, 5000 lbs; but too big to go thru the tiny, 10 high, 10 wide doors. That also meant we couldn’t get any of our trucks inside. 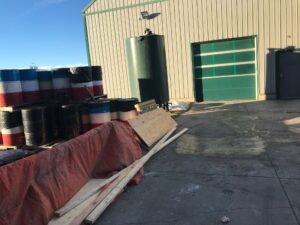 We had alternatives, our 2.9-ton mini cranes were a little light for a 5000 lb tank, but we also had carry decks; low, rubber-tired, worksite cranes that could squeeze inside. They are tough little machines but had fairly large heads on the boom tips. Our final lift measurements were too close to the ceiling for a single lift from the center of the tank. There was no central lift point, the lugs were on the sides, so we would have long slings, (too long), or a wide lift bar, still sketchy. We needed to rethink.
We had to lay the tanks over to get thru the dollhouse door; so we needed two cranes. One lift, one tailing. If we sent two carry decks, and single lined them both, once we got the tank inside we could use both carry decks and lift from the sides. That would lower our height requirements considerably.
That worked well, and we did 3 tanks and 2 other machines, even though we were working in a section of the building that dropped 10 ft lower than the entrance. We also moved half a dozen 400 barrel coated tanks about in the yard. Shuffling the big, black, creatures close to the buildings. They were 14,000 lbs, 23 ft high, 13 wide.
The customer called back and wanted one of the 400 barrels inside. Really? 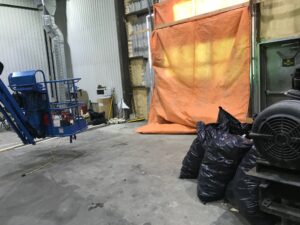 This was a much different scenario. They would widen the door, make it high as we needed. That would be good, because now we needed something big inside, for certain. And whatever we put inside was trapped in there until we got the tank stood because it would block the entire entrance. Nothing was getting in, or out. So we had better get it right because the cavalry was ‘not’ coming.
It turned into a 4 crane lift. We planted a 30-ton knuckle inside, on one side of the room, and the larger carry deck, tucked along the end wall. on the other side. There was just enough room for the big tank to slide between them.
Meanwhile outside, we had another 2 cranes to lift and lay the big vessel over and shuffle it to the door so our interior cranes could grab the end. We put the top in first. We wanted to grab the bottom lift lug but the whole vessel would probably have rolled over once we got off the ground; we couldn’t take that chance. We had to use the outside lift lugs. The ceiling was 29 ft, vessel, 23. At 13 wide, ideally, that’s a 6.5 ft sling, from two points. Too long. We had a custom lift bar, especially for these situations. 14 wide, 15,000 capacity, and a central built in swivel that allowed us to remove the hook from our knuckle and shackle directly into a custom low profile dead stick. Even then we would be close, but our measurements looked promising.

We hoped the tank could be stood by our interior knuckle in one controlled effort. If we got close and had any trouble the carry deck was there. We would need it anyway, but it was also insurance to guarantee we could finish this little project.
Once we got the vessel positioned inside we had a couple more ideas. We left the bottom of the tank sticking out the door about a foot and our outside knuckle set up directly behind so he had a straight lift. He rigged short and lifted from a convenient lug that was oriented on the top lip. ‘Capiche?’ When we started to lift from inside, and the tank started to tip up, that bottom lift lug would slowly work itself down. Your operators have to be sharp here. Let the top man lead and the tailing crane follow.
We rigged up the lift bar and with both cranes holding the vessel in the air, started to lift. Up and up, and adjust the distance and swing the black momma up and over. It was slow, and a little painful but our rigging was perfect, and our height good, but some expensive little lights were hanging from the ceiling. We pulled them back and slowly brought the tank up, over, extended it away from our crane, and the lights; and our tailing man let the tank bottom come to the ground. We were standing.

At that point, we were able to use both booms to lift on the sides again and move the tank into the final position.
Four cranes, a five-man crew; 2 large knuckles, one inside, one out, a 50-ton straight boom, a carry deck, a custom lift bar; lots of rigging and a lot of planning and measuring to move one tank. Plus hack the door apart.
We returned a few days later and laid over a smaller tank.
It’s all good. But these smaller jobs sometimes turn into mini-projects.